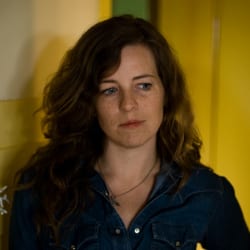 Lee Anne Schmitt is an artist and filmmaker based in Los Angeles. She explores the juncture between fiction and documentary that defines the ‘essay film’.

She creates evocative, deeply felt works that consider everyday elements of American life as cultural ritual, including a series of cinematic investigations of the intersections of landscape with the history of the American Left (Awake and Sing, 2003), the logic of labor and use (California Company Town, 2008), cowboyism and trauma (The Last Buffalo Hunt, 2011).

Her most recent feature Purge This Land centers around the legacy of the radical abolitionist John Brown. The title is taken from John Brown's letter of 1859: 'I…am now quite certain that the crimes of this guilty land will never be purged away but with blood.' It received an award from the Los Angeles Critics' Association in 2018.

Her most recent work (The Farnsworth Score, 2017) was a collaboration with the composer Rob Mazurek, filmed in Mies van der Rohe's Farnsworth House in Plano, Illinois.

All of her work begins with landscape, the experience of living in a particular place at a particular time, the phenomena of time and space, and the space between the ideology and the reality of the spaces we live within. History is always marked upon the land. The reality of our world was born out of very specific moments and choices, a construction that is neither organic nor inevitable.

She has exhibited widely at venues that include MoMA NY, the Getty Museum, RedCat Theater, Northwest Film Society, Centre Pompidou and festivals such as Viennale, CPH/DOX, Oberhausen, Rotterdam, BAFICI and FID Marseilles. Schmitt is a recent recipient of both a Graham Foundation Grant and a Creative Capital Award. She teaches at CalArts.