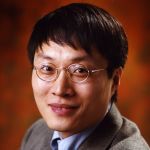 Lei Liang is a Chinese-born American composer whose mostly stage and chamber works have been performed throughout the world. He earned numerous prizes as both a composer and pianist in China before coming to the US at age seventeen. He studied composition with Sir Harrison Birtwistle, Robert Cogan, Chaya Czernowin, Mario Davidovsky, Joshua Fineberg, and Bernard Rands, and received degrees from the New England Conservatory of Music (B.M. and M.M.) and Harvard University (Ph.D).

Lei Liang is active in the research and preservation of traditional Asian music. His articles have appeared in numerous journals in the U.S. and in China. His recordings are released on Telarc International, GM, Spektral, Opal, Encounter Records, and Mode Records (due 2009).