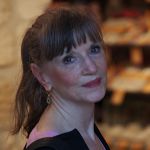 Leigh Behnke is a New York City based painter whose roots go back for multiple generations to rural New England. She was born in Hartford and raised in Manchester, Connecticut, until art school tempted her away at age eighteen. She graduated from Pratt Institute, and received her graduate training at NYU.

Starting in graduate school she became interested in the formal properties that make up an image, and how those properties could recontextualize the way we perceived it. By working with multiple images she could change one element in a work, and compare it to others to see how its “reading” is affected. The study of perception in this manner has been the basis of her work ever since.

She has been on the faculty of the School of Visual Arts since 1979. She currently teaches Foundation Painting in the Honors and Fine Art Departments, as well as a unit on Contemporary Imagery to advanced undergraduates.

Her work is represented in the United States by Fischbach Gallery in New York City, and in London by Plus One Gallery. She has shown regularly, with solo shows beginning in 1979, and the most recent in March 2013. Her work has also been featured at the National Academy of Science in Washington, D.C., the Thomas Segal Gallery in Boston, and the Elaine Baker Gallery in Florida.

The ED Foundation awarded her two consecutive grants, in 1999 and 2000. Her documentary data and research materials are housed at Smithsonian Archives of American Art.

Her work has been reviewed in the New York Times, Art Forum, Arts Magazine, and the Washington Post, among print forums. She has been included in numerous museum shows nationally and internationally, as well as a number of public collections.