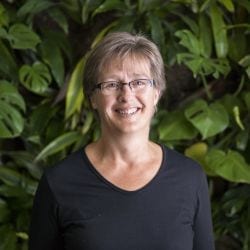 Lenore Fahrig is Chancellor’s Professor of Biology at Carleton University, Ottawa, Canada. Lenore and her students study how human-caused landscape change - replacement of forest, wetland, and other natural habitats with roads, farmlands, and cities - affects wildlife and biodiversity. Study species include frogs, turtles, birds, bats, other mammals, insects, spiders, plants, and lichens. Lenore is best known for her work on habitat fragmentation, where she has shown that protecting many small patches of habitat is just as valuable for species conservation as protecting few large patches of the same total area. She is also known for her work showing the large impacts of roads and traffic on wildlife populations, especially on amphibians. In the mid-1980's Lenore co-introduced the concept of habitat connectivity, which is now widely used in urban and regional planning.