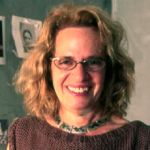 Lenore Malen is an internationally recognized multi-disciplinary artist who uses the mediums of photography, video and audio installation, and performance to blur the lines between documentary and fiction. Using the lens of history—and humor–she examines extreme belief systems and the sciences and technologies that inform them.

As the founder of The New Society for Universal Harmony, a rekindling of an 18th-century healing community, Ms. Malen creates historical re-stagings that incorporate subjects such as Mesmerism, the social structures of utopian communities, and most recently the social organization of the beehive.

Her current production, The Animal That I Am, 2009-10, narrates the grave threat to the bee population and the immanent worldwide crisis of food production from the point of view of the independent beekeeper. Filmed on-site in the Hudson Valley region, the video features interviews with beekeepers who have devoted their lives to their colonies. The interviews are intercut with historical and found footage, providing a crucial context for how we have understood and framed our relationship with these social insects. The film highlights our innate need for contact with a diversity of other life forms, not just our own. The title is an homage to Jacque Derrida’s The Animal That Therefore I Am, which is both a philosophical examination into the way we have anthropomorphized animals and a plea against the industrialized treatment of them.

Lenore Malen’s perspective as a visual artist is informed by her extensive training in art history and critical discourse. From 1990 to 1997 she was Executive Editor of Art Journal (College Art Association). In 2005 she published The New Society for Universal Harmony (Granary Books). In 2002 she was a Senior Fellow at the Terra Foundation, Giverny, France. She has been a fellow at Yaddo and Blue Mountain Center, NY and The Fine Arts Work Center, Provincetown Mass. Ms. Malen has taught and lectured at Bennington College, Rhode Island School of Design, Cooper Union, and Parsons, The New School For Design. Malen’s work has been featured in the New York Times, Art on Paper, and Art in America, Village Voice, Sculpture Magazine, BOMB, and other publications.