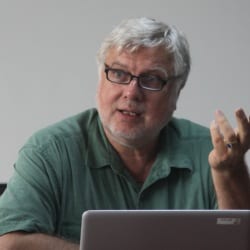 Dutch born Leonard W.J. van der Kuijp was initially interested in mathematics and biology, but shifted his focus on things Philosophy and Tibetan in the early 1970s. Graduating with BA (1975) and MA (1976) degrees in Far Eastern Studies from the University of Saskatchewan, Saskatoon, Canada, where he studied with H.V. Guenther, he completed his DPhil dissertation (1979) at Hamburg University, Germany, where he did Buddhist Studies with L. Schmithausen and Geshe Gendün Lodro, philosophy with W. Detel, and Chinese with Liu Mau-tsai. These were formative years. Returning to Saskatoon, he began courses towards a degree in Agricultural Economics. Five months in these courses, he was offered a position in Kathmandu with the Nepal-German Manuscript Preservation Project that was to last six months but ended up working in Nepal for almost five years!

He then taught at the Free University in Berlin (1985-1987) and at the University of Washington, Seattle (1987-1995). In 1993, he was awarded a MacArthur Fellowship, which enabled him to travel to and do research in China, and establish a number of Tibetan and Chinese contacts.

As Professor of Tibetan and Himalayan Studies, he has been at Harvard since 1995. Among his doctoral students, he has had several Tibetan students who, having graduated with a PhD in Tibetan and Himalayan Studies, are now teaching in China. Since 1999, he is President of the Board of the Tibetan Buddhist Resource Center (tbrc.org), the brain-child of the late E. Gene Smith. He has taught Tibetan and Chinese students the princi-ples of reading Classical Tibetan texts at Renmin University, Beijing, and Sichuan Uni-versity, Chengdu. Beginning in 2002, he has co-directed several Summer Institutes through the National Endowment of the Humanities. His scholarly interests range from Indo-Tibetan Buddhist intellectual history to Tibetan-Mongol and Sino-Tibetan relations. A listing of his publications can be viewed at academia.edu.