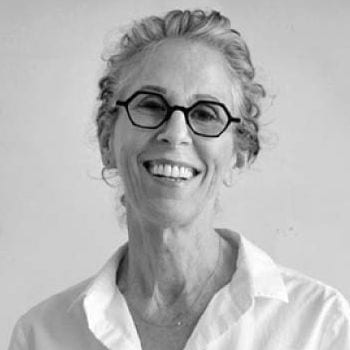 Leslie Wayne is a painter and an occasional writer and curator. She is represented by Jack Shainman Gallery and lives and works in New York City. Her signature works are known for their highly dimensional surfaces of oil paint, forcing a re-examination of the term painting in the traditional sense. They often take the literal form of draped cloth, or like readymades, stand in for the objects they represent. In her new body of abstract work entitled Free Experience, Wayne reaches for, in her words, “that seductive dislocation” by exploring the range of possibilities for the representation of an illusion in as many different ways as possible, from tromp-l’oeil to verisimiltiude, while still remaining undeniably within the confines of a painting.

Wayne was born in Germany in 1953 and grew up in Southern California. She studied painting and printmaking at the University of California, Santa Barbara’s College of Creative Studies at which time she developed a correspondence with the French photographer Jacques Henri Lartigue, and made a series of prints based on his work. She left school in her third year and moved to Paris to study French and to immerse herself in the art and museums of Europe. She then moved to Israel where she lived and worked from 1975-1980 and continued to paint mostly plein-air landscapes. After she returned to California Wayne moved to New York and transferred to Parsons School of Design where she explored a new language of abstraction by studying sculpture. She received her BFA in Sculpture with Honors in 1984.

Wayne’s role as artist-curator began after she graduated from Parsons and opened a small commercial gallery for two years called 50 West in the Hell’s Kitchen neighborhood of New York City. Since that time she has continued to curate shows for other venues in New York and for several university galleries in the U.S. Her interviews with artists have been published in artcritical.com.

Wayne has been the subject of 32 solo shows, two traveling surveys, and over 150 group exhibitions since 1974. Her work has been reviewed in The New York Times, Art in America, Artforum, Artnews, The New Yorker, Newsweek, The Washington Post, The Brooklyn Rail, The San Francisco Chronicle, Tema Celeste, and The Los Angeles Times, among others in the U.S. and Europe.

She has been the recipient of a Joan Mitchell Foundation grant, a Pollock-Krasner Foundation grant, a New York Foundation for the Arts Fellowship in Painting, a New York State Council on the Arts Projects Residency Grant, a Yaddo Artists Fellowship, a Buhl Foundation Award for abstract photography and an Adolph and Esther Gottlieb Foundation grant. Her work is in the public collections of the Birmingham Museum of Art, Birmingham, AL; la Coleccion Jumex, Mexico City; Collezione Maramotti, Reggio Emilia, Italy; the Corcoran Gallery of Art, Washington DC; le Fondation Cartier pour l’art contemporain, Paris; the Cooper Hewitt Design Museum Smithsonian Library, NYC; The Miami Museum of Contemporary Art, FL; the Portland Museum of Art, Portland, OR; and the Neuberger Museum of Art, Purchase, NY, among others.

Wayne is a member of the National Academy and is currently working on a glass commission for the MTA Arts and Design, to be installed at the Bay Parkway Station on the F line in the fall of 2017.