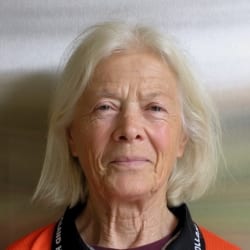 I was born in Rotterdam and am now based in Los Angeles since the 50’s. I have been a monochrome painter for decades and prefer the quiet side of life (except for some chaotic jazz). I began practicing Zen Buddhism in 1988 and though meditation has certainly informed my approach to painting, I try to avoid the Zen clichés. The poetic nature of simple elements like texture and color are very important in my work… I like people to feel my paintings without touching them.

Since 1980 I’ve been showing my work both nationally and internationally, with solo exhibitions in Los Angeles, Santa Fe, Mexico City, and South Korea. I’ve been included in important group exhibitions in New York, Los Angeles. Rome and Germany. In 2015 I was chosen in Rome as one of only 6 artists to represent the Panza Collection in the first posthumous tribute to Dr. Panza. In 2003 I had a residency at the Chinati Foundation in Marfa, Texas; in 2005 I was the recipient of the COLA Fellowship from the City of Los Angeles; my most recent solo show in Los Angeles was at Susanne Vielmetter LA Projects in 2016; in 2017 I had a residency at Kaus Australis in Rotterdam and a solo exhibition in Seoul.

My work is included in the Panza Collection, Milano, Italy; the Jumex Colección, Mexico City; and the Weisman Collection, Los Angeles, and others.