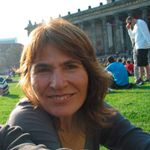 New York–based artist Lilla LoCurto was born in San Francisco de Macaira, Venezuela. She received a B.F.A. in sculpture from Arizona State University, studied additionally at the Accademia di Belle Arti in Rome, and received an M.F.A in sculpture from Southern Illinois University, Carbondale. Since 1991 she has collaborated with William Outcault in producing interactive installations, sculpture, photographs, prints, and video animations. Their imagery has focused on the vulnerability of the body and its relation to culture and technology, often also engaging diverse fields such as mathematics, architecture, geography, medicine, and machine vision. For some time their practice has employed three-dimensional scanning technologies to map, deconstruct, and animate the figure. Together they have been awarded grants by the Indiana Arts Commission, Art Matters Inc., the Lyman Allyn Art Museum, and the Council for the Arts at MIT. They have had residencies and visiting-artist positions at Carpenter Center for the Visual Arts, Harvard University; Colorado State University, Fort Collins; Maryland Institute College of Art; the Richard M. Ross Museum, Ohio Wesleyan University, and the Wexner Center for the Arts, Art, and Technology. They have given presentations at the Association of American Geographers Conference, the Cartography in the Age of Digital Media symposium at Yale University School of Architecture, and the Max Planck Institute for Biological Cybernetics in Tubingen, Germany.

Exhibitions include a widely traveled solo exhibition selfportrait.map, which originated at the List Visual Art Center at MIT. It went on to the Bellevue Art Museum, the Lyman Allyn Art Museum, and University Art Museum, California State University, Long Beach, among other institutions. They have had other solo exhibitions at the Frederieke Taylor Gallery in New York, the Newport Harbor Art Museum, Fundacio Joan Miro, Barcelona, Spain, and Carpenter Center for the Arts at Harvard University. Their work has been included in group exhibitions such as New Art. New York: Reflections on the Human Condition in Traun, Austria; Digital: Printmaking Now at the Brooklyn Museum of Art; and Contemporaneou.s. in Cornwall and Sunderland, United Kingdom. Other selected group exhibitions have been at Maryland Institute College of Art, the John Michael Kohler Art Center in Wisconsin, Nexus Contemporary Art Center in Atlanta, and the Weatherspoon Art Museum in Greensboro, North Carolina. They have contributed chapters and articles about their work to such publications as The Meaning of Photography (Clark Institute), Mapping in the Age of Digital Media (Yale University), and the journal Cartographic Perspectives. Published essays on their work include "Lilla LoCurto and William Outcault: Self-Portraits for a New Milennium" by Helaine Posner for Art Journal (Spring 2006); "[un]moving pictures" by Patricia Phillips (2006), for a ten-year survey exhibition at the Samuel Dorsky Museum of Art at SUNY New Paltz; and "Visual Fields" by Denis Wood for Cartographic Perspectives (Winter 2007).

Lilla LoCurto and Bill Outcault – Till We Have Faces