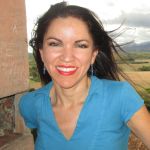 Lillian Guerra is the author of many scholarly essays as well as three books: Popular Expression and National Identity in Puerto Rico (1998), The Myth of José Martí: Conflicting Nationalisms in Early Twentieth-Century Cuba (2005), and Visions of Power in Cuba: Revolution, Redemption and Resistance, 1959–1971 (2012). Her creative writings include contributions to the works of renowned photographers Alex Harris and Cathryn Griffith as well as three collections of Spanish-language poetry, published in Quito, Ecuador,  Havana, Cuba, and most recently, Cimarrona (2013) by Editorial Verbum in  Madrid, Spain. She has also authored a forthcoming manuscript of short stories, Cartografía Corporal, for publication by Editorial Verbum.  Ms. Guerra is currently writing a fourth book of history, Making Revolutionary Cuba 1946–1958, to be published by Yale University Press. She is also a 2014–2015 recipient of the senior faculty fellowship of the American Council of Learned Societies. The daughter of Cubans who came to the United States in 1965, she has lived, researched, and taught classes in Cuba over the course of forty visits in the last seventeen years. A graduate of Dartmouth College, she received her Ph.D. degree in history from the University of Wisconsin and has taught Cuban, Caribbean, and Latin American history at Bates College, Yale University, and the University of Florida.