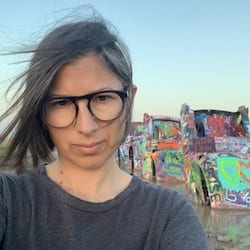 Liz Cohen (American, b. 1973) received her MFA degree in Photography from the California College of the Arts and BFA in Studio Art from the School of the Museum of Fine Arts and a BA in Philosophy from Tufts University. Cohen's work has been characterized as examining immigration, nonconformity, and resistance. She is best known for the projects BODYWORK, CANAL, and HIM. For BODYWORK she transformed an aging East German Trabant into an American El Camino lowrider, and herself into a car customizer and bikini model. CANAL, a series of black and white photographs and performances, documents sex workers on the fringe of the Panama Canal Zone. HIM, depicts an ostracized poet through black and white photographs, weavings, and collaged textiles. Cohen has received awards from the Louis Comfort Tiffany Foundation, the MacDowell Colony, Akademie Schloss Solitude, the Creative Capital Foundation, and the Kresge Foundation. She has exhibited work at Site Santa Fe, Ballroom Marfa, the Cranbrook Art Museum, and Museum Tinguely. Cohen's projects have been written about in the New York Times, Art in America and Lowrider Magazine. Liz Cohen is currently a professor at Arizona State University's School of Art.  To see her work, visit her website.