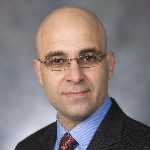 Luay Nakhleh is an Associate Professor of Computer Science at Rice University, and holds joint appointments with that university's departments of Ecology & Evolutionary Biology, and Biochemistry & Cell Biology. Further, he is an adjunct Associate Professor in the Department of Systems Biology at the M.D. Anderson Cancer Center, and a faculty member of the Structural and Computational Biology & Molecular Biophysics Program at Baylor College of Medicine.

Nakhleh received his Ph.D. in Computer Science in 2004 at the University of Texas at Austin, under the direction of Tandy Warnow. He received an Alfred P. Sloan Research Fellowship in 2010, a Faculty Early Career Development Award from the U.S. National Science Foundation in 2009, the Phi Beta Kappa Teaching Prize at Rice University in 2009, and an Early Career Principal Investigator Award from the U.S. Department of Energy in 2006.

Nakhleh develops mathematical models and computational methods for evolutionary analyses of genomes and interactomes. In particular, he works on bringing techniques from phylogenetics and population genetics to tackle problems in evolutionary genomics. Further, he is currently developing algorithms for ancestral network reconstruction. During his Guggenheim Fellowship, Nakhleh will focus on these two major endeavors.