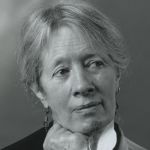 Lyn Hejinian is a poet, essayist, and translator. Her most recent published book of poetry is Saga / Circus (2008). A collection of collaborations written with Jack Collom, Situations, Sings, also came out in 2008. Other books include A Border Comedy (Granary Books, 2001), Slowly and The Beginner (both published by Tuumba Press, 2002), and The Fatalist (Omnidawn, 2003). The University of California Press published a collection of her essays entitled The Language of Inquiry in 2000. Ms. Hejinian is also actively involved in collaboratively written works, the most recent examples of which include a major collection of poems by her and Jack Collom titled Situations, Sings (Adventures in Poetry, 2008). Translations of her work have been published in Denmark, France, Spain, Japan, Italy, Russia, Sweden, China, Serbia, and Finland. She is the recipient of a Writing Fellowship from the California Arts Council, a grant from the Poetry Fund, and a Translation Fellowship (for her Russian translations) from the National Endowment for the Arts; she received an Award for Independent Literature from the Soviet literary organization “Poetic Function” in Leningrad in 1989. She has traveled and lectured extensively in Russia as well as Europe, and Description (1990) and Xenia (1994), two volumes of her translations from the work of the contemporary Russian poet Arkadii Dragomoshchenko, have been published by Sun and Moon Press. Since 1976 Ms. Hejinian has been the editor of Tuumba Press and from 1981 to 1999 she was the co-editor (with Barrett Watten) of Poetics Journal. She is currently the co-director (with Travis Ortiz) of Atelos, a literary project commissioning and publishing cross-genre work by poets. Other collaborative projects include a work entitled The Eye of Enduring, undertaken with the painter Diane Andrews Hall and exhibited in 1996; a composition entitled Qúê Trân with music by John Zorn and text by Ms. Hejinian; two mixed media books (The Traveler and the Hill and the Hill and The Lake) created with the painter Emilie Clark; the award-winning experimental documentary film Letters Not About Love, directed by Jacki Ochs; and The Grand Piano: An Experiment in Collective Autobiography, co-written with nine other poets. In the spring of 2007, she was elected a Chancellor of the Academy of American Poets. She teaches in the English Department at the University of California, Berkeley.