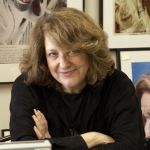 Lynn Hershman Leeson is perhaps the most influential woman working in new media today. Her work in photography, video, installation, interactive and net-based media have all been recognized with much acclaim. Her 53 videotapes and 7 interactive installations have garnered many international awards, including First Prize Vigo, Spain and First Prize Crystal Trophy, Montbelliard, France. In 2005 she received the Award for Positive Innovations in Media from the International Digital Media and Arts Association. Additionally she holds the 1999 Golden Nica from Ars Electronica.

Last fall the University of California Press published a monograph, Secret Agents Private I, The Art and Films of Lynn Hershman Leeson. In conjunction, a touring retrospective of her work opened in November 2005 organized by the Henry Gallery in Seattle. Also in 2005 she completed a new media commission for the San Francisco Museum of Modern Art and a public art commission for Charles Schwab.

In 2004 Stanford University Libraries honored Ms. Hershman Leeson by acquiring her entire working archive from 1966 to 2002. The archive contains material related to all stages of her completed projects since the early 1970s, including preliminary conceptual research and drawings, technical specifications, media, correspondence, and photographs.

Ms. Hershman Leeson was the first woman to receive a tribute and retrospective at the San Francisco International Film Festival in 1994, and she was awarded the ZKM/Seimens Media Arts Award. In 1998, she was a Sundance Screenwriter Fellow and was honored with the Flintridge Foundation Award for Lifetime Achievement in the Visual Arts.

Strange Culture won the 2007 Marlin Riggs Award from the Bay Area Critics Circle. The 2003 Alfred P. Sloan Award for writing and directing was awarded to Ms. Hershman Leeson for Teknolust, starring Tilda Swinton and Jeremy Davies, which premiered in the American Showcase of the 2002 Sundance Film Festival. Lynn Hershman Leeson‘s first feature film, Conceiving Ada, was shown at the 1998 Sundance Film Festival, Toronto International Film Festival, Berlin International Film Festival, and thirty-five other festivals worldwide. It also received the award of "Outstanding Achievement in Drama" from the Festival of Electronic Cinema. Conceiving Ada was released by Fox Lorber in February 1999 and on DVD in February 2000.

Ms. Hershman Leeson is a Professor Emeritus at the University of California, Davis and an A.D. White Professor at Large at Cornell University, and Chair of the Film Department at the San Francisco Art Institute. She is a 2008 recipient of a Creative Capital grant. During her Guggenheim Fellowship term, she will be working on her next film, Women Art Revolution, The (Formerly) Secret History,