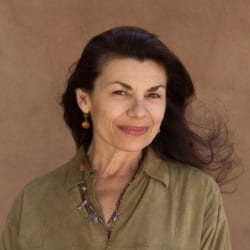 Photographer Maggie Steber’s most recent project, The Secret Garden of Lily LaPalma, casts Steber as Lily, her dark alter-ego in an alternate universe where anything is possible and all ideas and characters are welcome. Turning from “the tyranny of documentary photography” where she has concentrated on the exterior world and other peoples’ stories, Steber has created a safe place where she can examine her own imagination and subconscious as impacted by personal experiences. The photographs depict a disjointed world of dark and sinister forces that reference nightmares as both a cinematic model and the idea that the photograph is equal parts witness as well as catharsis.

Steber is a documentary photographer known for her humanistic stories of people and cultures. She has worked in 66 countries. The overarching theme of her work has explored the human experience and how people and cultures are perceived in comparison to how they imagine themselves. She has produced significant work on Haiti over the past 30 years. Aperture published her monograph entitled DANCING ON FIRE: Photographs from Haiti (1991) which received a book award and critical acclaim. Of her photographs of Haiti, Haitian-American artist Edouard Duval Carrie wrote:

“Steber photographed Haiti’s rather convoluted modern history but always from the point of view of the Haitian people. Her photographs convey the grave dignity that is an innate character of Haitians, a core assumption of hers despite the numerous instances where her life had been threatened in the course of her assignments”.

Her current Haitian project relies on the use of an iPhone and focuses on democratization through technology equality since the 2010 Haitian earthquake. Steber serves on the advisory board and teaches with Fotokonbit.org, a Haitian-based non-profit that teaches photography to a new generation of Haitians who perceive the image of themselves and their nation beyond foreign depiction. Proceeds go to pay for students’ continuing education. Under Steber’s guidance, photographs by Fotokonbit students were featured in the December 2015 issue of National Geographic Magazine in a story entitled “Haiti on Its Own Terms.”

Memory and history are themes threading throughout Steber’s work. For nine years she photographed and filmed her scientist mother during the melancholic voyage of her memory loss which became a self-published book entitled RITE OF PASSAGE and a multimedia presentation of the same name produced by MediaStorm.

Besides her life as a photographer Steber served as Assistant Managing Editor of Photography and Features at the Miami Herald from 1999-20003, overseeing photo-driven projects that won a Pulitzer Prize and were twice finalists for the honor. From 1990-1994, she served as a Newsweek Magazine contract photographer.

Steber’s photographs are included in private and public collections including the Library of Congress. She has served as judge on many competition and grant panels including the Pulitzer Prize Committee for Photography for 2015, World Press Photo, the Alexia Grant, the Alicia Patterson Grant, Pictures of the Year, and the Getty-Instagram Grant. She serves on the advisory boards of Facing change.org and VII Foundation. She regularly teaches workshops at the World Press Photo Master Classes in Amsterdam, the Foundry Workshop, LOOK3 Photo Festival, Bursa Photo Festival in Turkey, and the Leica Akademie USA. Her main editorial clients include National Geographic Magazine, The New York Times, Smithsonian, The New Yorker, AARP, The Guardian, Politico, People, and Geo Magazine. Main clients include National Geographic Magazine, The New York Times Magazine, Smithsonian Magazine, AARP, The Guardian, Politico, People, CARE, Der Speigel and Geo Magazine.

She Does podcast: Maggie Steber: There Are Worse Places To Die (July 1, 2015)

The Audacity of Beauty: Maggie Steber's Journey with Haiti