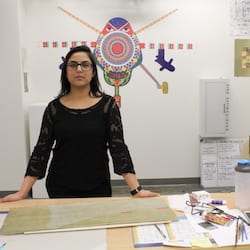 Initially trained as a miniature painter from the National College of Arts, Lahore, Pakistan, Mahwish Chishty has aggressively combined new media and conceptual work with her traditional practice. Chishty became interested in military drones after her visit to Pakistan in 2011. By camouflaging modern war machines with folk imagery, Chishty is shedding light on the complexity of acculturation, politics and power.