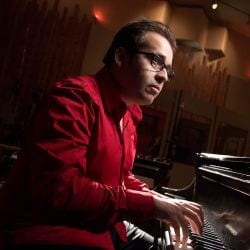 A Cuban pianist, bandleader, composer and arranger, my goal is to forge innovative sounds that bring a vitality and newness to the idioms of jazz and Latin jazz — constantly workshopping
musical ideas to develop new composition and arranging techniques that bring together Cuban, Puerto Rican, Brazilian and various jazz styles and forms.

Growing up in Havana, Cuban music is an undeniable part of my heritage and colors my writing. I draw from my background, including Cuban popular music as well as folkloric music. I’m equally influenced by Impressionistic harmonies of the likes of Ravel and Debussy as well as the jazz works of masters like Herbie Hancock and Wayne Shorter. Overall, I try to create complex music that is simple to the ears but that it also has a lot of substance for those that dig deeper.

My musical training started at an early age at Havana’s Manuel Saumell Conservatory originally studying classical saxophone. It wasn’t until emigrating to the United States in December 1994 when I switched to the piano. I began composing in 2000 while enrolled in the jazz program at the New York’s
The New School and studied, among others, with Reggie Workman, George Garzone, Jane Ira Bloom, Gerard D’Angelo and Richie Bierach.

“He leaves no doubt that he’s destined to play a role in the future of jazz. Valera shows a keen jazz vocabulary, a gift for creating grooves that invite stellar solo flights from his collaborators and the nerve to romance a melody when it suits him,” said Philip van Vleck of Billboard Magazine. In the years since critically-acclaimed “Forma Nueva” I have recorded another 12 cds as a leader (see composition list), creating work for solo, duo, trio, quartet and sextet including adaptations for woodwinds and strings, each defining my pianistic voice, compositional repertoire and arranging
techniques. I have become well known in the New York City modern jazz scene, garnering national reviews and lending my talents as a pianist, composer and arranger to such notable artist as Arturo Sandoval, Paquito D’Rivera, Brian Lynch, Dafnis Prieto, Jeff “Tain” Watts, John Benitez, Yosvany Terry
and classical violinist Joshua Bell.

Some accomplishments include a Grammy nomination for my sixth recording New Cuban Express — dubbed “Jazz Cubano for Modern Times” — released in June/2012 in the Best Latin Jazz Album
category. Press awards include Jazziz Critics’ Choice for “The Best of 2007” and the “2007 Jazz Twirlies,” a celebration award given to those most worthy in modern jazz. I’ve been been awarded composition grants from Chamber Music America New Jazz Works in 2006, 2013 and 2017; the Dranoff/Bacardi Two Piano Composition Award in 2015 and 2018; the 2005 ASCAP Young Jazz
Composer Award; and Jazz Journalist Association’s awards finalist nominee of the Up & Coming Musician of the Year category. I have traveled the world, performing in more than 30 countries at some of the biggest international venues and festivals.