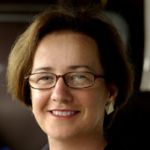 Margaret McFall-Ngai is a professor in the Department of Medical Microbiology and Immunology at the University of Wisconsin-Madison. She is one of the leaders in the frontier field of the role of beneficial bacteria in health and disease. She received her Ph.D. degree from the University of California, Los Angeles, in 1983. During her doctoral work, she was a field biologist, with a study site in the central Philippine Islands. Her work centered upon how animals use the light produced by luminous bacteria in their behaviors. In recognition of her contributions during her graduate career, she was named Graduate Woman of the Year at UCLA in 1983. Her postdoctoral work at Jules Stein Eye Institute (UCLA Medical Center) and Scripps Institution of Oceanography (UC San Diego) focused on protein biochemistry and biophysics. To pursue these studies, she was awarded a University of California President’s Fellowship, and a National Research Service Award from the National Institutes of Health.

Combining the training from these experiences, she accepted a faculty position in Biological Sciences at the University of Southern California (USC), where she began studies on the role of beneficial bacteria in the promotion of health in animals. At that time, biologists were already realizing that such symbioses were likely to occur in all animals, including humans, but that these associations most often occur as highly complex, multispecies consortia of bacteria living with the animal host. Margaret McFall-Ngai, in collaboration with microbiologists and biochemists, and with support from the National Institutes of Health, National Science Foundation, and Office of Naval Research, developed the use of a simple animal model system, the squid-vibrio association, for the study of the establishment and maintenance of an animal-bacterial symbiosis. For these research efforts, as well as for excellence in teaching, she was given the Albert S. Raubenheimer Award for Outstanding Junior Faculty at USC in 1994.

After receiving tenure at USC, she was recruited to the Kewalo Marine Laboratory at the University of Hawaii (UH) in 1996, where she joined a group of internationally recognized cell and developmental biologists who use model invertebrates to address basic biological and biomedical questions. While at UH, she received a grant from the WM Keck Foundation to develop genomic tools for the study of her model symbiosis, and from the Rockefeller Foundation to organize an international meeting on symbiosis at the Rockefeller Conference Center in Bellagio, Italy. In recognition of her contributions to the field of microbiology, she was elected to the American Academy of Microbiology in 2002. In the same year, she received the Regents’ Medal for Excellence in Research in recognition of her scholarship at UH, and was the recipient of the Miescher-Ishida Prize from the International Society for Endocytobiology. She was also involved in several leadership positions while in Hawaii, including serving as the Chair of the Rhodes Scholar Committee for the State of Hawaii.

In 2004, in response to a cluster-hire initiative in the field of symbiosis, Dr. McFall-Ngai accepted a position at the University of Wisconsin, Madison, in the Department of Medical Microbiology and Immunology. At UW Madison, she continues to develop the squid-vibrio model and to promote the study of beneficial animal-bacterial interactions. In addition to focusing on the work of her laboratory, she has been active in integrating this field into other areas of biology, particularly as it influences the discipline of immunology. She is currently serving as the Chair-Elect of the national meeting of the American Society for Microbiology. In addition, she is a member of the Board of Life Sciences of the National Academy of Science, addressing “A new biology for the 21st century: Ensuring the US leads the coming biology revolution.” As part of a committee of eighteen biologists from across the country she is charged with helping the government identify the key areas of biological research that should be developed in the near future.

During her Guggenheim term, Margaret McFall-Ngai will be studying the role of symbiosis in shaping evolutionary selection, specifically on the form and function of the animal immune system. The traditional view of the immunity is that its principal function is to fight microbial infection. Recognition that, to maintain a healthy state, animals require persistence associations with hundreds of species of beneficial bacteria demands that we rethink this view. To effectively incorporate the essential role of microbial symbioses into our conceptual understanding of the animal immune system, she will visit the world’s major centers of microbiology and immunology research to gain a full view of where biologists now stand on these concepts, and where they will need to go to open new horizons.