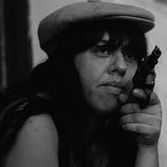 Since the publication of Piedras Rodantes (Ed. Cuarto Propio, 1988) when she was only twenty-one, Malú Urriola has become one of the premier poets in Chile and all of Latin America. That first collection was written with the support of a Fellowship from the Pablo Neruda Foundation, and at the time of its release was highly praised by critics, who applauded it as one of the best books of the year.

Her popular and critical success led to a number of invitations to speak and to conduct poetry workshops throughout Chile, as well as in Argentina, Spain, Peru, and Puerto Rico. In addition, she was chosen to represent Chile at the I Bienal latinoamericana de Arte Joven, organized by the city of Buenos Aires in 1989. In 1994, she received a grant from FONDART, which led to her third book of poetry, Dame tu sucio amor (Ed. Surada), which earned an honorable mention for the 1995 Premio Municipal de Poesía. Her fourth collection, Hija de perra (Ed. Cuarto Propio) followed in 1998.

Malú Urriola is also a successful screenwriter, and has produced scripts for a number of different television stations and studios, including Chile Films, Televisión Nacional de Chile, Productora Imaex, Rivas & Rivas Producciones. She is a member of Sociedad de Autores Nacionales de Teatro, Cine y Audiovisuales (ANT). Her script for the television feature Sofía, which dealt with violence toward women, was aired as part of the Televisión Nacional de Chile series “Cuentos de Mujeres” and garnered the Premio Mejor Aporte Televisivo, awarded by the Servicio Nacional de la Mujer (SERNAM).