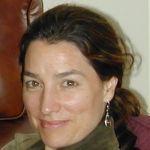 Mariana Achugar received her Ph.D. from the University of California, Davis, and is currently Associate Professor of Spanish and Second Language Acquisition in the Department of Modern Languages, Carnegie Mellon University. Her work investigates language, identity, and ideology from a critical discourse analytic perspective. She has been currently exploring the teaching and learning of history in multilingual classrooms in the U.S. with the support of a Spencer Foundation research grant. Her most recent book-length publication deals with the discursive construction of traumatic pasts and institutional identity, titled What We Remember: The Construction of Memory in Military Discourse (John Benjamins, 2008). During her Guggenheim Fellowship she will explore what Uruguayan teenagers know about the military dictatorship and how they learn about this period. The collective memory transmitted to younger generations influences their perception of national identity and their investment in political life. In this project, she plans to investigate how the period of the latest dictatorship in Uruguay is remembered by different generations. In particular, she will explore the role discourse and different contexts (i.e., the family, the school, and popular culture) have in the transmission of a traumatic recent history through an ethnographic study. She, her husband, and two children will be in Uruguay in the coming year.