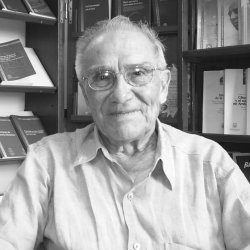 Marino Villavicencio Núñez (1922–2013) was born in Ancash, Peru, and studied at the National University of San Marcos where he obtained degrees in medicine (B.M. and M.D.). He then undertook further studies at the University of Chicago as a Fellow of the Rockefeller Foundation, and at the Edsel B. Ford Institute for Medical Research. He conducted further research at the University of California, Berkeley, as a Guggenheim Fellow.

Among his publications are forty-three articles in international journals such as Archives of Biochemistry and Biophysics and Biochimica et Biophysica Acta, in addition to several books, including a textbook on biochemistry.