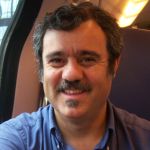 Dr. Mario Galigniana was born in the Argentinean Western city of Mendoza, just at the foot of the Andes. At the age of four, while he played among vineyards surrounded by snowed mountains, he also learned how to read and write with the best instructor he could have, his own mother, who was a school teacher. When he was six, the whole family moved to the cosmopolitan city of Buenos Aires, where he lives since then. Because of his father stimulated him to cultivate his mind and spirit, he also acquired the habit of reading classics. However, his vocation was not devoted to the written arts, but science.

Mario Galigniana studied biochemistry at the University of Buenos Aires. During the last years of his career, he attended ad honorem the Institute Campomar, which was directed by the Nobel laureate Dr. Luis Leloir. His aim was to learn as much as possible about biochemistry in an institution that was the best in the country at that time. Dr. Galigniana assigns particular importance to that period because it was the learning foundation on which his further career lies. That was the place where he gained the practical knowledge regarding how to think, organize, and analyze an experiment. Due to the lack of fellowships and the economic limitations that the local scientific community suffered during those days, it was not possible for him to accomplish his wish of working on research. Thus, Dr. Galigniana got several positions as director of clinical laboratories, but he always kept dreaming of his passion, until one day he was able to come back to the research field. For this, he counted on the unconditional support of  his best classmate at the University and still is his greatest friend in life â€•his wife, Graciela.

As a consequence of those delays, Dr.Galigniana received his Ph.D. degree in early 1996 when he was 38, an age when many people are already group leaders. His thesis was co-mentored by Dr. Carlos Lantos and Dr. Gerardo Burton. He analyzed the bases of the mineralocorticoid action studying the conformational requirements of a steroidal frame to confer sodium-retaining properties to a mineralocorticoid receptor ligand, regardless of the presence of certain functional groups always thought to be essential for such biological activity. These findings allowed the prediction of the biological activity of a given steroid by knowing its conformational structure, which became a novel advance for designing compounds in pharmaceutical settings. These studies also led him to analyze steroid receptors and their associated chaperones, so he decided to do a postdoctoral training with Dr. William Pratt at the University of Michigan Medical School, one of the leading laboratories in the field. During this period, he studied the folding of the chaperone machinery associated to the glucocorticoid receptor, and it was discovered that high molecular weight immunophilins play a cardinal role in receptor transport to the nucleus.

After the postdoc period, Dr. Galigniana took up an independent position at the University of Michigan, and eight years after, he returned to Argentina, thanks to the support of the Argentine Research Council (CONICET) and Antorchas Foundation. He was appointed Professor at the University of Buenos Aires in the Department of Biological Chemistry of the Exact and Natural Sciences School, where he is director of the Molecular and Cellular Biology Laboratory. He is also Principal Investigator of the CONICET, and became Director of the Nuclear Receptors Laboratory of the Institute of Biology & Experimental Medicine (IByME-CONICET). His group studied the biological role of TPR proteins on the steroid receptor action and demonstrated that these proteins interact with nucleoporins and importins facilitating the passage of the whole receptor-chaperone heterocomplex through the nuclear pore. These findings set the bases for a novel mechanism of action of steroid receptors that ended with a model heuristically posited twenty-five years ago. Moreover, it opened new trends to understand how a few nuclear pore-associated molecules regulate the selective trafficking of thousands of cargoes. Currently, the Galigniana lab is studying the roles of the TPR-domain immunophilins FKBP51 and FKBP52 in several aspects of the biology of the cell, such as the subcellular relocalization of other nuclear receptors, the regulatory role in NFkB signaling, telomerase activity, neurite outgrowth and neuronal differentiation, and the balance between cell proliferation and apoptosis. Dr. Galigniana has published fifty-five manuscripts in top ranked journals such as the Journal of Biological Chemistry, Molecular & Cellular Biology, Biochemistry, Oncogene, Endocrinology, and Molecular Endocrinology, among others, and has also published several books, has given lectures in numerous international meetings and prestigious societies around the world, and is a peer-reviewer of international journals, grants, and thesis from national and international organizations and foreign universities. His findings on the steroid receptor field have been reproduced by other groups around the world in other systems and different experimental models, changing the perspective for some biological processes. According to Harzing’s database, his works received over 2,000 citations since 1996, half of them during the last five years.

His long lasting aim by the time he retires is to return to his home-land and to join his wife in teaching their great-grandchildren to read and write, just like his parents did with him when he was learning how to walk in this life.