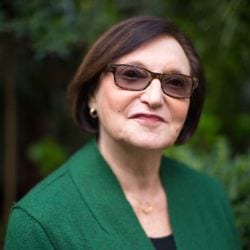 Marjorie Garber is the William R. Kenan, Jr., Professor of English and of Visual and Environmental Studies at Harvard University.

She is the author of eighteen single-authored books and the editor or co-editor of seven edited collections. She has written extensively on Shakespeare (Dream in Shakespeare, Coming of Age in Shakespeare, Shakespeare’s Ghost Writers, Shakespeare After All, Profiling Shakespeare, and Shakespeare and Modern Culture), as well as on gender and sexuality (Vested Interests: Cross-Dressing and Cultural Anxiety and Vice Versa: Bisexuality and the Eroticism of Everyday Life), culture and society (Dog Love and Sex and Real Estate: Why We Love Houses) and literary study and the arts (Academic Instincts; Patronizing the Arts; A Manifesto for Literary Studies; The Use and Abuse of Literature), and has published four collections of essays (Symptoms of Culture; Quotation Marks; Loaded Words; and The Muses on Their Lunch Hour). Her book Shakespeare After All was awarded the Christian Gauss Prize by Phi Beta Kappa. She has published essays in Critical Inquiry, Raritan, and the Shakespeare Quarterly, as well as articles and Op-Ed pieces in The New York Times, The New Yorker, The Atlantic, Harpers, and The Chronicle of Higher Education. She was a member of the advisory board of the public television series Shakespeare Uncovered, and has appeared in several of its programs, as well as in many other television and radio interviews.

At Harvard she has served as the Director of the Humanities Center, the Director of the Carpenter Center for the Visual Arts, the Chair of the Department of Visual and Environmental Studies, Associate Dean of the Faculty of Arts and Sciences and Director of Graduate Studies in the English department. Her teaching, in both seminars and lecture courses, has been honored by the university and by her students. She has been a Walter Channing Cabot Fellow, an award given to tenured faculty for distinction in research, teaching, and mentoring, and has also received teaching awards from the Harvard Extension School and from Yale College. The Harvard Crimson named her as one of its Fifteen Professors of the Year.

In addition to her teaching and writing, she has held a number of offices in national and international organizations. Over the course of her career she has been President of the Consortium of Humanities Centers and Institutes, Trustee of the English Institute, Trustee of the Shakespeare Association of America, and a member of the Board of the American Council of Learned Societies. She was selected by the Boston Public Library as a Literary Light. She is an Honorary Senior Research Fellow at the Shakespeare Institute in Stratford-upon-Avon, and was the First Inaugural Dean’s Visiting Professor at King’s College, London. She is a member of the American Philosophical Society.

Her newest book, The Character Issue, forthcoming from Farrar, Straus and Giroux in 2020, is an exploration of the question of character in all its moral, social, political, and literary dimensions.