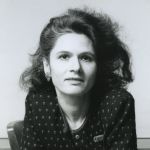 With diagram and inscription in mind, Marjorie Welish produced In the Futurity Lounge/Asylum for Indeterminacy (2012), taking poetic advantage of the architectural sites conceived in John Roebling’s Delaware Aqueduct, over the Delaware River; Hans Poelzig’s I.G. Farben plant, in Frankfurt; Rem Koolhaas’s IIT McCormick Tribune Student Center, in Chicago; and Diller Scofidio + Renfro’s High Line, in New York. For another, commissioned project, she had created both images and text with James Siena for the constructed book Oaths? Questions? (2009), which has traveled to shows throughout the Europe and the United States, most recently exhibited in Cambridge, England, and Vienna, Austria. On two projects currently, she has been creating a portfolio of installations—realized and projected—for an eighteenth- to twentieth-century project space in Edinburgh, Scotland. Meanwhile, on the poetry side, she is concentrating on creating works that track code-making and code-breaking in Ezra Pound and John Ashbery. Grants and fellowships in support of her work have come from the Djerassi Foundation, Howard Foundation, MacDowell Colony, and New York Foundation for the Arts. She was the Judith E. Wilson Visiting Fellow in Poetry at Cambridge University in 2005. She has also received grants and fellowships from the Adolph and Esther Gottlieb Foundation and Elizabeth Foundation for the Arts, Fifth Floor Foundation, Pollock-Krasner Foundation, and Trust for Mutual Understanding (supporting an exchange between the International Studio Program, New York, and the Artists’ Museum, at ÅódÅº, Poland). In 2006, she received a Fulbright Senior Specialist Fellowship, to teach at the University of Frankfurt and at the Edinburgh College of Art in the spring of 2010, and recently she was an artist-in-residence at the School of the Art Institute of Chicago. Of the Diagram: The Work of Marjorie Welish (Slought Foundation) compiles papers given at a University of Pennsylvania conference devoted to Welish’s writing and art, on April 5, 2002.   Profile photograph by Star Black