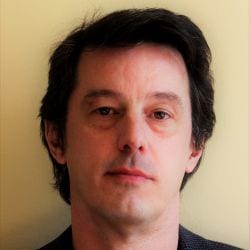 Mark Jurdjevic is a professor of early modern European history at the Glendon campus of York University in Toronto. He studies the political, intellectual, and cultural history of the Italian Renaissance. He received his PhD from Northwestern University and holds an MA and BA from the University of Toronto. He has also taught at the University of Ottawa as an assistant professor in History and at Yale University as a Mellon postdoctoral fellow at the Whitney Humanities Center. He has held fellowships from the Fulbright Foundation, the Mellon Foundation, the Harvard University Center for Renaissance Studies (Villa I Tatti), and the Institute for Advanced Study.

He has written two books on Florentine political culture. The first, Guardians of Republicanism: The Valori Family in the Florentine Renaissance (Oxford, 2008), reconstructed the political careers and patronage strategies of five generations of the Valori family and showed how their support of Marsilio Ficino, Girolamo Savonarola, and Niccolò Machiavelli resulted in a distinctive hybrid republicanism that fused the classical and Christian traditions. The second, A Great and Wretched City: Promise and Failure in Machiavelli’s Florentine Political Thought (Harvard UP, 2014), focused on Machiavelli’s historical and constitutional writings and showed how they reveal new, specifically Florentine, aspects of his republican political thought and convictions. He has co-edited a collection of Machiavelli’s writings, a collection of Renaissance political writers, and a collection of essays on early modern ritual culture. He has published articles in journals such as Past and Present, Renaissance Quarterly, Journal of the History of Ideas, and English Historical Review, as well as in several essay collections.

As a Guggenheim fellow, he will be working on friendship networks shared between Machiavelli and Francesco Guicciardini and examining how their correspondence and epistolary debates informed the realist turn in late Renaissance historical and political writing.