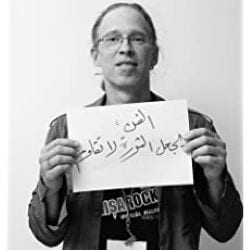 As an historian, musician, activist and journalist, I explore the aesthetic embeddedness of art and politics across the myriad cultures comprising the Middle East and Africa. As a young guitarist returned to school to study religion and history, my first journey across these regions followed the reverse trajectory of the “blue note” that first defined the melodies of Southwest and Central Asia, moved across the fertile crescent into North and then West Africa before arriving on American shores in the melodies of enslaved Africans. After four books on the history of Palestine/Israel, globalization and extreme music in the Middle East and North Africa, I've devoted my research and music to the complex cultural histories of what I term the “funk belt,” stretching from West to East Africa between the Sahel and the equator, focusing on recording, performing with and studying traditional and “world” musicians who are creating art in the midst of intense social, political and military conflict. I have worked to develop a practice of culture jamming rooted in indigenous and decolonial perspectives that bring together artists, scholars and activists to create new forms of politically engaged cultural production that educates and motivates people towards struggles for social, political, economic and environmental justice. Kakuma Sound Photo Credit: Arab Bloggers Summit 2014 (AB14), Amman, Jordan