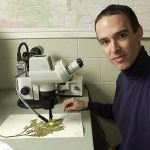 As a systematic botanist, his research program consists of two interrelated components: conceptual aspects of molecular phylogenetics, and systematics of the flowering-plant family Celastraceae (spindle-tree family). In his conceptual research, he has addressed four steps involved in DNA-based phylogenetics studies: character-sampling strategies, sequence alignment, character coding, and phylogenetic-inference methods. As one of the few botanists in the world who work on the poorly known Celastraceae, his primary goals have been to determine the relationships of Celastraceae relative to other families and to infer the intergeneric relationships and patterns of character evolution within the family. His research has been supported by the National Geographic Society and the National Science Foundation.

During his Guggenheim term, he will be conducting fieldwork on Catha edulis (“qat”), a species of evergreen shrubs and trees, in eastern Africa. Qat contains three alkaloids that are structurally similar to amphetamine: norephedrine, cathine, and cathinone. Because of its amphetamine effects, qat is cultivated throughout its native range and its cultivation has been expanding. Millions of people make their living growing, transporting, and trading qat. The goals of his research include inferring the number of times that qat was domesticated, where qat was domesticated, and inferring the relationship between different types of qat with each other as well as with wild qat.