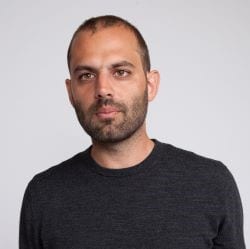 Martin DiCicco is a director and cinematographer whose feature directorial debut, All That Passes By Through a Window That Doesn't Open (2017) won the Regard Neuf award at Visions du Réel, Camden IFF' Cinematic Vision Award and Taiwan IDF' Artistic Merit Prize and played at numerous international festivals. His short Here There Is No Earth (2018), about a tragedy on the Turkish/Armenian border, premiered at the 56th New York Film Festival and was exhibited at MoMA DocFortnight, Dokufest, Zinebi, and the Cinemateca Uruguaya. He was part of the Emmy-nominated directing team behind the first  season of Undrafted, and as a cinematographer he has collaborated with Brett Story on CamperForce (2017) and The Hottest August (2019), as well as with Cecilia Aldarondo on Picket Line (2017) and her forthcoming feature Landfall (2020). Photo Credit: Joseph Armario