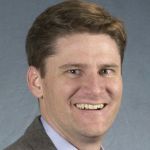 Martin Doyle is an associate professor in the Department of Geography, and the Institute for the Environment at the University of North Carolina – Chapel Hill. His research and writing is focused on rivers. Spending his childhood in southern Mississippi and part of his education at Ole Miss, he developed a long-term interest specifically in the rivers of the U.S. South. He has designed rivers, blown up dams, and flooded wetlands, all in the name of science.

Mr. Doyle teaches and conducts research at the interface of science, engineering, economics, and policy of environmental management and restoration. He works in collaboration with ecologists, engineers, and economists, as well as with state and federal agencies, and private industry. In addition to basic research on biophysical processes that occur in rivers, he also tries to understand how science, policies, and markets interact to destroy or restore natural ecosystems. He has developed long-term research programs in which he and his students work alongside environmental entrepreneurs to more fully appreciate the realities and financial motivations for private investment in environmental markets.

Martin Doyle holds a Ph.D. in Earth Science from Purdue University, a Masters in Environmental Engineering from Ole Miss, and a Bachelors in Physics and Math from Harding University. He has received several research awards including a National Science Foundation Early Career Award (2005), the Nystrom Award from the Association of American Geographers (2004), the Horton Grant from the American Geophysical Union (2001), and the Chorafas Prize from the Chorafas Foundation in Switzerland (2002). For his work in bridging environmental science and policy, in 2008 he was named an Aldo Leopold Leadership Fellow by Stanford University, and received a GlaxoSmithKline Faculty Fellowship for Public Policy from the Institute for Emerging Issues.

He teaches courses in river processes, environmental geography, and river restoration, with courses ranging from 6 to 200 students. He advises graduate students and post-docs in geography, environmental engineering, and ecology.

Martin Doyle will use his time as a Guggenheim Fellow to complete a book on the history and political economy of rivers of the U.S. South.