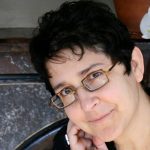 Mary Cappello was trained in SUNY/Buffalo’s poetics program and in its Center for the Psychoanalytic Study of the Arts where she took her Ph.D. in the late 1980s with a specialization in nineteenth-century American literary and cultural studies, and the then-burgeoning field of Medical Humanities. In the mid-1990s, she began creating experimental prose pieces which now might be categorized as creative nonfiction and lyric essay, but that she was composing with an eye toward poly-vocality and unanticipated form. “My Mother Writes the Letter that I Dream,” an essay about her mother’s agoraphobia and her use of letter-writing as a way of leaving the house, led to her first book, Night Bloom (Beacon Press). A multi-genre work, Night Bloom is a meditation on the twinned legacies of violence and creativity in a working-class Italian American family. Following a tradition of queer portraiture (e.g., Gertrude Stein, H.D., David Plante, Hilton Als) and queer theory (especially Michel Foucault and Eve Sedgwick), Cappello published “discursive double portraits” of gay life in the United States in the age of AIDS. In response to our nation’s refusal to dwell in discomfort and embrace uncertainty in the aftermath of the events of September 11th, her second book, Awkward: A Detour (Bellevue Literary Press), a Los Angeles Times bestseller, ranges across subjects as diverse as ontological discomfort and situational silence, immigration and stuttering, the life and work of Rainer Werner Fassbinder, Emily Dickinson, and Henry James, tact and its etymological kinship with “touch,” precociousness and developmental imperatives. In 2007, a breast cancer diagnosis yielded Called Back (Alyson Books), a counter-narrative oriented around the conventional phases of breast cancer treatment (from diagnosis through surgery, chemotherapy, radiation, and “cure”), but that seeks for each phase an uncommon language and conceptual center as point of meditation. Called Back received a ForeWord Book of the Year Award and an Independent Publishers Award (IPPY), and was a Finalist for a Publishing Triangle Award, and a Lambda Literary Award. “Getting the News,” an excerpt from Called Back that appeared in the Summer 2009 issue of The Georgia Review, won a GAMMA Award for Best Feature from The Magazine Association of the Southeast.

Cappello’s most recent book, Swallow: Foreign Bodies, Their Ingestion, Inspiration and the Curious Doctor who Extracted Them (The New Press, 2011) emerged out of a collection of “foreign bodies” housed in Philadelphia’s Mutter Museum: nearly 2000 swallowed or aspirated “things” that pioneering laryngologist Chevalier Jackson extracted nonsurgically from the air and foodways of people in the early 20th century and that he also saved and framed. Part psychobiography, part cultural history, part philosophical meditation, Swallow plumbs all manner of Jacksoniana and in the process restores some of the narratives, lives, and longings that haunt the peculiar foreign body collection.

Some of Cappello’s recent essaying addresses Gunther von Hagens’ bodyworlds exhibits (in Salmagundi); sleep, sound and the silence of silent cinema (in Michigan Quarterly Review); the psychology of tears (in Water~stone Review); the uncanny dimensions of parapraxis and metalepsis (in Interim), and the aesthetics of the short form. Cappello’s essays can also be found in such places as Raritan, Southwest Review, Western Humanities Review, Seattle Review, and American Letters and Commentary. A recipient of the Dorothea Lange/Paul Taylor Prize from Duke University’s Center for Documentary Studies and the Bechtel Prize for Educating the Imagination from Teachers and Writers Collaborative, Mary Cappello is a former Fulbright lecturer at the Gorky Literary Institute (Moscow, Russia) and currently Professor of English and creative writing at the University of Rhode Island.

During the term of her Guggenheim Fellowship, she will pursue a book-length, multi-disciplinary meditation on “mood” and sound tentatively titled, In the Mood: Toward a Psychology of Atmosphere.