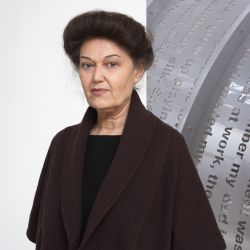 Through the political and personal content of her project-based work, Mary Kelly has shaped a formative critique of conceptual art since the 1970s. Her iconic work on the mother/child relationship, “Post-Partum Document,” (1973 – 1979) is an art-historical touchstone. Realized at the highpoint of the women’s movement, “Post-Partum Document” created a connection between conceptualism’s interrogation of the object and the identity-based practices of the 1980’s and 1990’s.

In 1989 Kelly joined the faculty of the Independent Study Program at the Whitney Museum of American Art in New York. Her four-part work, “Interim,” (1984-89,) women’s reflections on the body, money, history and power, was exhibited at the New Museum in 1990. The symposium held in conjunction with the exhibition marked a critical moment in the dialogue between postmodernism and feminism. During the 1990s, Kelly focused on the topic of war in a series of works that developed the medium of compressed lint, using a dryer screen to form text in intaglio. This process culminated in a 200-foot long, linear lint relief, “The Ballad of Kastriot Rexhepi,” (2001.)

More recently, Kelly has turned to the theme of collective memory in works like “Circa 1968,” first exhibited in the 2004 Whitney Biennial, and “Love Songs,” presented at Documenta 12, 2007. Since 1996, Kelly has been Professor Art in the School of Art and Architecture at the University of California, Los Angeles, where she has established an Interdisciplinary Studio area for graduate students engaged in site-specific, collective and project-based practices.