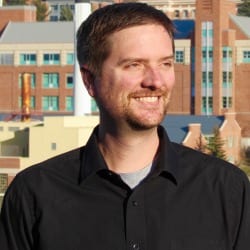 Matthew Avery Sutton is the Edward R. Meyer Distinguished Professor of History at Washington State University. His research focuses primarily on the relationships among religion, politics, and American culture from the late nineteenth century to the present.

His Guggenheim Fellowship will support his current project, a book tentatively entitled FDR’s Army of Faith: Religion and Espionage in World War II, which will be published by Basic Books. This project looks at the roles that missionaries and religious activists played in espionage and covert operations during the war. Their actions facilitated the rise of a new American religious nationalism ostensibly grounded in the championing of global freedom of religion, which political and religious leaders used to justify significant aspects of U.S. intelligence and foreign policy for the rest of the century.

Sutton’s most recent book American Apocalypse: A History of Modern Evangelicalism (Belknap Press of Harvard University Press, 2014) is the first comprehensive history of modern American evangelicalism to appear in a generation. It shows how a group of radical Protestants, anticipating the end of the world, paradoxically transformed it. He has co-edited a collection of essays entitled Faith in the New Millennium: The Future of American Religion and Politics (Oxford University Press, 2016), which uses history to explore how religion is shaping the modern world. He has written a textbook, Jerry Falwell and the Rise of the Religious Right: A Brief History with Documents (Bedford/St. Martin’s, 2012). His first book, Aimee Semple McPherson and the Resurrection of Christian America (Harvard University Press, 2007), won the Thomas J. Wilson Memorial Prize from Harvard University Press, awarded annually to the best book in any discipline by a first-time author. The book also served as the basis for the Public Broadcasting Service documentary Sister Aimee, part of PBS’s American Experience series.

Sutton spent the 2012-2013 academic year in Ireland as the Mary Ball Washington Professor of American History at University College Dublin (on a Fulbright U.S. Scholar Grant) and the 2014-2015 academic year in Germany as the Marsilius Kolleg Visiting Professor and Scholar-in-Residence at the Heidelberg Center for American Studies, Heidelberg University. He has also held fellowships from the National Endowment for the Humanities and the Woodrow Wilson National Fellowship Foundation. Sutton has been featured on National Public Radio’s Morning Edition and MSNBC’s The Last Word, among many other news shows. He has lectured on religion, politics, and American culture across the U.S. and in universities in Ireland, the United Kingdom, Denmark, Germany, Spain, and the Czech Republic.