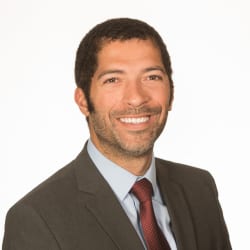 Matthew Delmont is a Professor of History at Arizona State University. He is a historian of civil rights and media, and is the author of three books: Making Roots: A Nation Captivated; Why Busing Failed: Race, Media, and the National Resistance to School Desegregation; and The Nicest Kids in Town: American Bandstand, Rock 'n' Roll, and the Struggle for Civil Rights in 1950s Philadelphia; as well as the digital history project “Black Quotidian: Everyday History in African-American Newspapers.” Delmont has also published articles and op-eds in the New York Times, The Atlantic, and other newspapers, magazines, and academic journals.

During the Guggenheim Fellowship period, he will work on a book tentatively titled To Live Half American: African Americans at Home and Abroad During World War II. This book is a narrative history that analyzes what the war meant for black Americans in local, national, and global contexts.