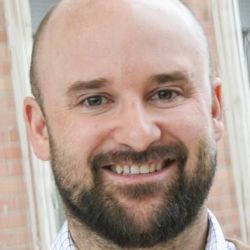 Matthew P. Canepa (PhD, University of Chicago) is an historian of art, archaeology and religions. A leader in the field of ancient Iranian art and archaeology, his research focuses on the intersection of art, ritual and power in the eastern Mediterranean, Persia and the wider Iranian world.

Professor Canepa's first book, entitled The Two Eyes of the Earth (University of California Press), is the first to analyze the artistic, ritual and ideological interactions between the late Roman and Sasanian empires in a comprehensive and theoretically rigorous manner. It was awarded the 2010 James Henry Breasted Prize from the American Historical Association for the best book in English on any field of history prior to the year 1000 CE. Theorizing Cross-Cultural Interaction (Smithsonian, 2010) studies the phenomena of cross-cultural interaction between the ancient to early Medieval Mediterranean, Western Asia and China.

Professor Canepa is a Fellow of the Society of Antiquaries of London. In addition to the Guggenheim, he has been the recipient of numerous research fellowships including from the Getty Research Institute (2013), the American Council of Learned Societies (2009-2010), the Deutsches Archäologisches Institut (2007), and the Council of American Overseas Research Centers (2002-2003). In 2009 he was invited to be a visiting Senior Research Fellow at Merton College, University of Oxford.