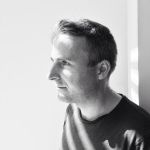 Matthew Pillsbury was born and raised in France but now lives in New York City. He received his B.A. in fine art from Yale University in 1995 and an M.F.A. from the School of Visual Arts, New York, in 2004. Pillsbury has focused on creating long-exposure black-and-white photographs using only the available light at the scene he is capturing. Much of his work deals with the increasing role of technology in our lives. Initially focused on private use of televisions and computers, he has become more interested with how our daily activities are increasingly mediated through the use of cell phones. An avid user himself, Pillsbury encourages us to question what we are giving up in exchange for this immediate access to information. His work has been exhibited internationally and is widely held in private and museum collections, including the Sir Elton John Photography Collection, Museum of Modern Art, Whitney Museum of American Art, and Guggenheim Museum, all in New York; San Francisco Museum of Modern Art, San Francisco; Musée du Louvre, Paris; and Tate Modern, London. In 2007, Pillsbury won the Prix HSBC pour la Photographie, which published his first monograph Time Frame. In 2013 Aperture released City Stages, a second monograph encompassing his work of the past decade. An accompanying exhibit was held in 2014 at the Aperture Foundation in New York. His work is represented by Bonni Benrubi Gallery, New York, and Jackson Fine Art, Atlanta.