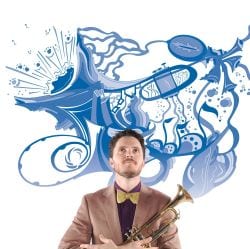 Trumpeter, Composer, and Educator Dr. Matthew White is currently Professor of Trumpet, Coordinator of Jazz and Commercial Music, Coordinator of Music Technology, and Director of Ensembles at Coastal Carolina University (Conway, SC) and was previously a first call freelance and session musician in Nashville and Miami. He holds degrees from the University of North Florida and the University of Miami.

As a composer, Matt’s music has been described as “rhythmically brash and invigorating” by the Washington Post. While rooted in the jazz tradition, his music often draws on non-musical inspiration, such as local culture, literature, scientific phenomenon, or personal experiences. This is perhaps best illustrated by the titles of his compositions, which include The Yankee Poured Out the Bacon Grease, The Hadron Collider, and The Copenhagen Garment Bag Incident.

Matt’s two releases as leader of The Super Villain Jazz Band both received 4-star reviews in Downbeat Magazine and were included in the Best of the Year lists. Press includes:

“In The Super Villain Jazz Band, Matt White validates himself as a legitimate jazz composer assisted by a group of outstanding jazz sidemen in an exceptional collection of jazz compositions.” – Jeffrey Uhrich, AllAboutJazz.com

“That concept makes for a fascinating journey... with technical precision and a knack for sweeping, cinematic statements..." - Brian Zimmerman, Downbeat Magazine (4-stars)

Running a professional and academic recording studio, Matt is increasingly utilizing technology in the creation of original musical works and manipulating musical content through recording techniques, editing, and sound synthesis. His self-release The Trumpet features only sounds originating from an acoustic trumpet. Matt wrote, performed, engineered, and mixed/mastered the entire album.

In addition to an active performing, teaching, and composing schedule, Matt is involved in numerous music research topics, including the preservation and archiving of traditional Gullah Spirituals, Visualization and Improvisation, and Brass Performance Fundamentals and Techniques. He has engineered and produced recordings for Dave Douglas, the Athenaeum Press, and Ron Daise.

Matt has been a member of the IASJ and Betty Carter Jazz Ahead residencies. He was a presenter at the 2017 ISJAC Conference for his St. Helena Island Suite and a keynote speaker at the 2017 Association for Leadership Educators Annual Conference.

Matt is a Bach Trumpet and Patrick Mouthpiece performing artist.