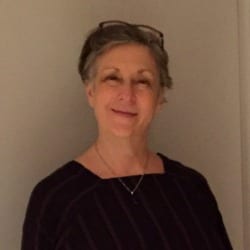 Maud Lavin is a nonfiction writer. Her books include Push Comes to Shove: New Images of Aggressive Women (MIT, 2010); Clean New World: Culture, Politics and Graphic Design (MIT, 2001); and Cut with the Kitchen Knife: The Weimar Photomontages of Hannah Hoech (Yale, 1993). As editor and coauthor, she has also published The Oldest We’ve Ever Been (Arizona, 2008) and The Business of Holidays (Monacelli/Random House, 2004). Push Comes to Shove was completed with the help of her Guggenheim Fellowship, and Clean New World with the aid of an NEA grant. She is a professor of Visual and Critical Studies and Art History, Theory, and Criticism at the School of the Art Institute of Chicago. Her hobbies are Pilates, reading mysteries, great conversation, traveling to China, and goofing off. Her most recent book is Boys' Love, Cosplay, and Androgynous Idols: Queer Fan Cultures in Mainland China, Hong Kong, and Taiwan, co-edited with Ling Yang and Jing Jamie Zhao (Hong Kong UP, 2017).