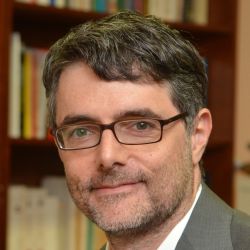 Maurice Samuels is the Betty Jane Anlyan Professor of French at Yale University. After earning his Ph.D. from Harvard University in 2000, he taught at the University of Pennsylvania before moving to Yale in 2006. His first book, The Spectacular Past: Popular History and the Novel in Nineteenth-Century France (Cornell UP, 2004), examined new forms of historical representation—including panoramas, theater, and the novel—in post-Revolutionary France. It won the Gaddis Smith International Book Prize given by Yale’s MacMillan Center. His second book, Inventing the Israelite: Jewish Fiction in Nineteenth-Century France (Stanford UP, 2010), brought to light the first Jewish fiction writers in French. It won the Scaglione Prize, given by the Modern Language Association for the best book in French studies. He co-edited a Nineteenth-Century Jewish Literature Reader (Stanford UP, 2013), which includes his original translations of nineteenth-century French Jewish fiction, and he has published articles on diverse topics, including romanticism and realism, aesthetic theory, representations of the Crimean War, boulevard culture, and writers from Balzac to Proust. In 2011, he became the inaugural director of the Yale Program for the Study of Antisemitism. His Guggenheim fellowship year will be spent completing a book on “French Universalism and the Jews.” The book argues that political universalism in France has taken shape largely as a discourse on Jews, and that whereas universalism and its corollary, laïcité, today tend to mean the evacuation of minority difference from the public sphere, this was not always the case. Through a close reading of a variety of texts, from political speeches to novels to films, the book reveals how and why a hardline form of universalism, hostile to difference, came to dominate the French political imagination, but also how alternatives to this restrictive model have been theorized from the time of the French Revolution to our present day.