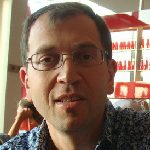 The author and scholar Maxim D. Shrayer was born in 1967 in Moscow, to a Jewish-Russian family, and spent nine years as a refusenik. He and his parents, the writer and doctor David Shrayer-Petrov and the translator Emilia Shrayer, left the USSR and immigrated to the United States in 1987, after spending a summer in Austria and Italy.  Shrayer attended Moscow University, Brown University, Rutgers University, and received a Ph.D. at Yale University in 1995. He is Professor of Russian, English, and Jewish Studies at Boston College, where he co-founded the Jewish Studies Program.

Shrayer has authored and edited over ten books of criticism, biography, nonfiction, fiction, poetry, and translation, among them the path-breaking critical studies The World of Nabokov’s Stories and Russian Poet/Soviet Jew. He is the author of the acclaimed literary memoir Waiting for America: A Story of Emigration, the first work to chronicle the experience of Soviet Jewish refugees in Austria and Italy, and of the collection Yom Kippur in Amsterdam. He has also edited and cotranslated two books of his father’s fiction for the Library of Modern Jewish Literature. Shrayer won a 2007 National Jewish Book Award for his two-volume Anthology of Jewish-Russian Literature.

Shrayer’s current research focuses on Jewish-Russian poets bearing witness to the Shoah and on the history and memory Shoah in the  USSR. Maxim D. Shrayer has been the recipient of a number of fellowships and awards, including those from the National Endowment for the Humanities, the Rockefeller Foundation, and the Bogliasco Foundation. He lectures widely on topics ranging from the legacy of the refusenik movement and the experience of ex-Soviet Jews in America to Holocaust literature and Jewish-Russian culture.