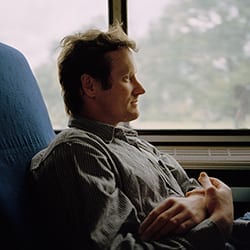 He explores themes of shared experiences and identity by photographing the American cultural landscape admits forces of modernization. His personal, often autobiographical, subject matter is recognized for its literary character, unconventional narrative form, and metaphoric use of light.

In 2010, McNair Evans returned to his childhood home of Laurinburg, North Carolina to retrace his father’s life and legacy after his death nine years earlier. The themes of this project were universal—the relationship between fathers and sons, the strength of family, and the disappearance of an agrarian way of life. Pre-released at the New York Art Book Fair (Owl & Tiger Books, 2014), Confessions for a Son sold out within months.

For three years, McNair has taken two-week Amtrak trips to meet and photograph passengers. He elicits first person, passenger-written journals, often about connection and change. Intimate, and at times autobiographical, In Search of Great Men explores a search for hope that so defines national identity.

His photographs are exhibited and held in public and private collections including those of the San Francisco Museum of Modern Art and Sir Elton John. McNair’s work has been featured in editorial publications such as Harper’s Magazine, The New Yorker, The Wall Street Journal, The San Francisco Chronicle, and The Financial Times, as well as on the cover of William Faulkner’s novel, Flags in the Dust.

McNair is represented by Sasha Wolf Gallery in New York City and lectures regularly at universities and colleges.