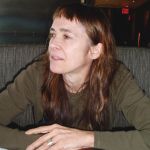 Medrie MacPhee was born in Edmonton, Alberta and has resided in New York City since 1978. She received a B.F.A. from the Nova Scotia College of Art and Design.

Ms. MacPhee has been a  recipient of a National Endowment for the Arts Grant, New York Foundation for the Arts Grants, Elizabeth Greenshields Award and established artist grants from the Canada Council. She was also a resident at the MacDowell Colony, the American Academy in Rome, and Flying Horse Editions, which produced a limited edition of her work.

The Charles H. Scott Gallery in Vancouver and the Art Gallery of the Saidye Bronfman Centre for the Arts, Montreal, organized Flight in the Variable Zone, a solo traveling exhibition of her work, which toured Canada in 1999-2000.

Ms. MacPhee is represented in various private and public collections in the U.S., Canada and Europe, including the Metropolitan Museum of Art, New York; The National Gallery of Canada; the Musee de Contemporain, Montreal; the Asheville Art Museum, NC; the Art Gallery of Ontario; the Edmonton Art Gallery; the Art Gallery of Greater Victoria; the Confederation Center Art Gallery, Charlottetown; and the Nickle Arts Museum, Calgary.