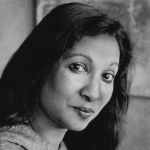 Meena Alexander was born in Allahabad, India, and raised in India and Sudan.  When she was eighteen she went to study in England.  Her volumes of poetry include the collections Illiterate Heart (2002), which won the PEN Open Book Award, Raw Silk (2004), and Quickly Changing River (2008).  She is the editor of Indian Love Poems (2005).  Much of her work is concerned with migration and its impact on the writer's subjectivity, and with the sometimes violent events that compel people to cross borders.  Alexander has written the autobiography Fault Lines (2005), chosen as one of Publishers Weekly's Best Books of 1993, and revised in 2003 to incorporated significant new material.  She has also published two novels and two academic studies.  Her book of reflections on poetry, migration, and memory, Poetics of Dislocation, appeared in 2009 as part of the University of Michigan Poets on Poetry Series. She is the recipient of the Distinguished Achievement Award in Literature, given by the South Asian Literary Association (an organization allied to the Modern Language Association) for contributions to American literature.

Early on, her fascination with memory and internal time consciousness led her to the study of phenomenology and she published a few papers in philosophical journals, on bodily space, dislocation, and memory, but it is in poetry that she has found a home, a way of making a shelter with words.  During her Guggenheim Fellowship term, she worked on a cycle of journey poems, following the route of her early voyage as a child, in the company of her mother, traveling by steamer from Bombay to Port Sudan (she turned five on the Indian Ocean).

Meena Alexander has served as an Elector of the American Poet's Corner, Cathedral of St. John the Divine.  She is a Distinguished Professor of English at Hunter College and the Graduate Center, City University of New York.

A book of essays on her work, Passage to Manhattan: Critical Essays on Meena Alexander (edited by Lopamudra Basu and Cynthia Leenerts), has just appeared from Cambridge Scholars Publishing, UK.

Follow this link to view Impossible Grace, written while Meena Alexander was a poet in residence at Al-Quds University, 2011.