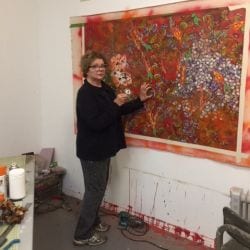 Merion Estes is known for making mixed media paintings using fabric collage, various paints and photo downloads to depict dystopian, apocalyptic landscapes. She was an early Feminist activist in the 70’s in Los Angeles and a pioneer in the area of painting known as Pattern and Decoration. She has had an active professional career since 1972. She was involved in early Feminist organizations including Womanspace and the first Woman’s Building where she was a founding member of the first and last women’s co-op. The gallery included Judy Chicago, Faith Wilding, Judith Simonian, Nancy Youdelman and many other notable artists. When that ended after eighteen months, she and a group from the co-op founded ‘XX” a social service group dedicated to exposing women’s works to a wider audience through curated shows in alternative spaces, publishing an historical book documenting all the various women’s groups of the time, “By Our Own Hands” and sponsored lecture series. She has shown regularly for forty-five years and has usually been reviewed favorably in various periodicals both local and national.

Highlights of her exhibition record over the years include a five-year survey in 1979 of her lacquer on layered vinyl sheets at the Municipal Gallery at Barnsdall Park. In the eighties, she was in numerous shows including a traveling show called “L.A. Downtown Artists: Between the Freeways”. In 2005 she was part of a five- artist show in the galleries of USC dealing with post-modern landscapes called “Contemporary Soliloquies on the Natural World” that included Karen Carson, Constance Mallinson, Margaret Nielsen and Takako Yamaguchi. In 2006 she was given a thirty-five year retrospective by Rebecca McGrew for the Pomona College Museum in Claremont, CA. In 2007 she had a solo show at the Cardwell Jimmerson Gallery in Culver City, CA. She had three shows at the now closed CB1 Gallery from 2015 to 2018. In 2018 she received the Murray Reich Grant for artist over 50 from the New York Foundation for the Arts. The recently closed survey show at the Craft and Folk Art Museum, curated by former LACMA head curator Howard Fox, with a catalogue, has been a high point of her life. Finally, she will be part of the upcoming show at MOCA called “Pattern and Decoration”, a comprehensive overview of the whole American movement and its many practitioners. It will open in October 2019. The work from the last eighteen years references topical disasters that have or are occurring as a result of the damage to the world’s environment through climate change and man’s greed and carelessness. “Burchfield’s Plea” was in the Pasadena Museum of California Art’s “Feminine Sublime“ 0f 2018 show as was “The Great Defrost”. The first refers to the cataclysmic wildfires in the west that have consumed vast portions of land and habitats for humans and living creatures. “The Great Defrost” of course refers to the melting of the icebergs where they occur due to an accelerated climate warming. “Drink Me” refers to the poisoned waterways caused by fracking, mining or man’s carelessness. ‘”Hot Zone,” recalls the dangerous and uninhabitable areas of nuclear meltdowns, the result of faulty reactors and human ineptitude. “Cooling Trend” is a cool ribbon of hope in an otherwise fiery “sky” consisting of Icarus-like approaches to the “suns” by two dragons and hot sunspots everywhere else. It references California’s previous summer that was the hottest on record. “Desolation Row” is a cautionary tale about dead elephants, trees on fire and a bone yard. “Pink Power” honors the women’s march the day after the inauguration of Trump. “Melancholia” is another reference to the ongoing poisoning of the Pacific Ocean by the Fukushima disaster in Japan.