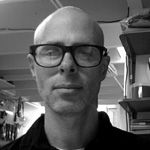 Michael Ashkin (born 1955) is an American artist who works in sculpture, installation, video, and photography and is best known for his use of miniature scale and modest materials in depicting marginalized landscapes. His work challenges the perceptual expectations of a semiotically encoded place, favoring readings that maintain resilience in the face of global capitalism’s large-scale spatial transformations. His work seeks to reveal uncanny historical potential within the most excluded of territories by suggesting their ultimately unknowable character.

Mr. Ashkin was born in Morristown, New Jersey, and before becoming an artist received an M.A. in Middle East Languages and Cultures from Columbia University and worked as a computer programmer for several large investment banks. He received his M.F.A. in Painting/Drawing from The School of the Art Institute of Chicago in 1993 and has since shown widely at museums and other venues both nationally and internationally. His work was included in Documenta 11 in 2002, and in the Whitney Biennial in 1997 and will be the subject of a solo exhibit at Secession in Vienna in 2009. Ashkin has also authored Garden State, a book treating the New Jersey Meadowlands as contemporary garden and is a contributing author to (Untitled) Experience of Place, presenting a collection of written fragments in conjunction with photographs of a Superfund site. He received a 2000 Lannan Foundation Residency Fellowship at Marfa, Texas, and has also been awarded grants from the New York Foundation for the Arts and the Pollock-Krasner Foundation. He is currently the Director of Graduate Studies in the Department of Art at Cornell University College of Architecture, Art, and Planning.