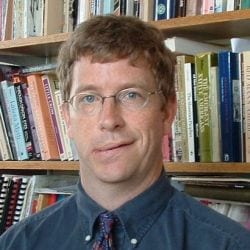 Michael D. McNally is Professor and Chair of the Religion Department at Carleton College, and has served as its first Broom Fellow for Public Scholarship. From Carleton, he received a B.A. in history. From Harvard, he received an A.M., an M.Div., and a Ph.D. in the Study of Religion.

He is author of Ojibwe Singers: Hymns, Grief and a Native Culture in Motion (Oxford U. Press, 2000), Honoring Elders: Aging, Authority, and Ojibwe Religion (Columbia U. Press, 2009) and editor of The Art of Tradition: Sacred Music, Dance & Myth of Michigan's Anishinaabe (Michigan State U. Press, 2009), and book chapters and articles in American Quarterly, American Indian Quarterly, Church History, and the Journal of Law and Religion. His work has received recognition through fellowships with the National Endowment for the Humanities, the American Philosophical Society, and the Mellon New Directions Fellowship, which supported a period of targeted legal studies training that launched his current project.

In his Guggenheim year, McNally will complete a book, Native American Religious Freedom Beyond the First Amendment, that explores how Native communities resourcefully seek legal protections for sacred places, practices, objects, knowledge, and ancestral remains that are not easily assimilated into the legal category of religion. Think of the Standing Rock Sioux Tribe’s compelling narrative of “defending the sacred” from a pipeline’s threats to land and waters, and the difficulty of fully articulating the claims in the available technical discourses of historic preservation and environmental law. The book explores the remarkable stories behind such urgent claims, and takes stock of the implications of their articulation in various legal discourses to inform discussions about religious freedom, the cultural history of religion, and the vitality of indigenous religions today.