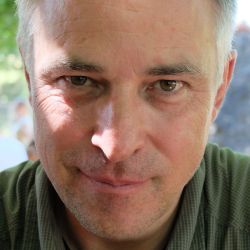 Michael Doebeli is one of the foremost mathematical evolutionary biologists in the world. He is the main authority for theory on the evolution of organismal diversity. His theoretical and experimental research led to a paradigm shift in how scientists understand the origin of new species. Once viewed as theoretically impossible, evolutionary biologists now accept that sympatric speciation is plausible and that it occurs in natural and experimental systems. Doebeli has also made major contributions to the theory of cooperation, where he has provided new perspectives that have led to a unified understanding of the evolution of cooperation in nature. Michael Doebeli received a PhD in Pure Mathematics from the University of Basel in Switzerland and is now a Professor in the Department of Zoology and the Department of Mathematics at the University of British Columbia in Vancouver, Canada. He has won a number of prestigious awards and is a Fellow of the Royal Society of Canada.