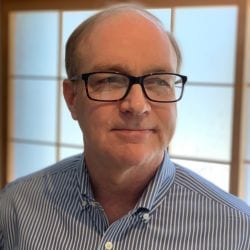 Michael K. Bourdaghs is the Robert S. Ingersoll Professor of East Asian Languages and Civilizations and the College at the University of Chicago. He earned his B.A. from Macalester College and his M.A. and Ph.D. from Cornell University. He previously taught at UCLA and has held visiting appointments at Tohoku University, International Christian University, and Waseda University in Japan.

He specializes in modern Japanese literature, culture, and intellectual history. His books include The Dawn That Never Comes: Shimazaki Tōson and Japanese Nationalism (2003) and Sayonara Amerika, Sayonara Nippon: A Geopolitical Pre-History of J-Pop (2012; Japanese translation 2012). He is the editor of the English translation of Kamei Hideo’s Transformations of Sensibility: The Phenomenology of Meiji Literature (2002) and of The Linguistic Turn in Contemporary Japanese Literary Studies: Textuality, Language, Politics (2010). He is co-editor of Literature Among the Ruins: Postwar “Japanese” Literary Criticism (2018), Politics and Literature Debate: Postwar Japanese Criticism 1945-1952 (2017), and the English translation of Natsume Sōseki’s The Theory of Literature and Other Critical Writings (2010), which was awarded the Scaglione Prize for Translation of a Scholarly Study of Literature by the Modern Language Association. He is also prolific translator, including Kojin Karatani’s The Structure of World History: From Modes of Production to Modes of Exchange (2014). He also writes fiction and has published a number of short stories in literary journals.

As a Guggenheim Fellow, he will be finishing a book on Japanese culture during the Cold War era. From Postwar to Cold War: Japanese Culture from the Age of Three Worlds will focus on literature, film, and popular music, looking at how writers and artists from Japan simultaneously participated in multiple international networks during the Cold War era: the so-called First World of capitalist liberal democracies, the Second World of the socialist bloc, and the Third World of the nonaligned Bandung movement.