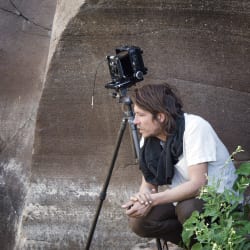 Michael Lundgren draws on a deep current in photographic tradition that takes the natural world as a seat of transcendence. Lundgren works collaboratively with artists, scientists and writers on historically and socially engaged bodies of work, but his true passion is the poetic potential of the medium. His first monograph, Transfigurations (2008) is an evolution of the modernist search for form within a primitive landscape. Award-winning publisher Radius Books has just released Lundgren’s second monograph, Matter, which is edited from nine years of picture making. Matter is a tightly woven sequence conjuring elements of the supernatural across multiple terrains.

Publications such as Foam, Design Observer, The Believer, and Hotshoe have published Lundgren’s work and interviews. He has been awarded accolades from the Magenta Foundation, 10x10 American Photobooks, The Silverstein Photography Annual, and the Arizona Governor’s Award. Lundgren collaborated with artist Mark Klett, environmental historian Philip L. Fradkin and acclaimed author Rebecca Solnit on the book and exhibition, After the Ruins, 1906 and 2006, Rephotographing the San Francisco Earthquake and Fire (2006), a project that probes the meaning of ruins, and the evolving geography and history of a resurrected city by bringing past and present into dynamic juxtaposition.

Lundgren’s work resides in the esteemed collections of the Center for Art + Environment, Nevada Museum of Art; the Victoria & Albert Museum, London; the Museum of Photographic Arts, San Diego; the Fralin Museum, Charlottesville; Brandts Museum of Photographic Art, Denmark; among others. Lundgren has exhibited in contemporary art galleries and museums including ClampArt and Bruce Silverstein galleries in New York; the Legion of Honor, San Francisco; the Fralin Museum; Tokyo Photo; Paris Photo; and the Victoria & Albert Museum. Most recently his work was included in exhibitions such as Out of Obscurity, Flowers Gallery, London, Defying Darkness, MOPA, San Diego and Where There’s Smoke at Fraenkel Gallery, San Francisco.

Lundgren spent his formative years roaming the woods and fields of upstate New York, receiving his BFA from the Rochester Institute of Technology. Pulled by the vast Western landscape, he moved to Phoenix, Arizona where he earned an MFA in studio art from Arizona State University. He continues to live and work in the West.