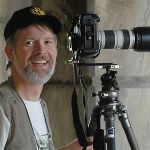 I was born in 1952. My first foray into photography came when I was eighteen years old. My father had a small darkroom in the basement and he showed me the basics of how to print a black-and-white negative. About six years later, between my undergraduate degree and graduate school, the glowing ember that was started as a teenager became a flame. My graduate degree was done at the University of Florida and I was fortunate to be in the right place at the right time. I was not an art or photography major, but became friends with instructors and graduate students in the Fine Arts photography program. These relationships were a source of personal encouragement as I began to teach myself how to see the world through the back of a camera. The last thirty-five years have been a voyage of making images and at the same time discovering the reality that the heart is the repository of life.

For the past five years I have been working on a project to reveal the work and spectacular motifs within large foundries. This project has carried me across the U.S. and into Europe. I desire to honor the work and the workers of an industry that is generally hidden, difficult to access, and yet vital to the global economy. My work is not nationalistic in nature, as I wish to show the commonality of a particular type of labor that is historical, often generational within families, and cuts across all geopolitical barriers.

I believe the camera can produce an image that portrays a scene that goes beyond documentation and enters a realm of heightened reality. For me, entering an industrial complex is as exciting as an adventure into an exotic foreign land. After photographing a scene in a foundry, I often show the workers the image on the back of the camera (LCD screen). I see the look upon their faces of surprise and delight as they see their work and environment from a different vantage point.

I produced my first book in 2008, entitled Foundry Work: A View of the Industry. The Guggenheim Fellowship is allowing me to continue the work within large foundries, but on a much more global scale. We live in a shrinking world that is fracturing and I hope this work is evidence that we have more in common than we realize.