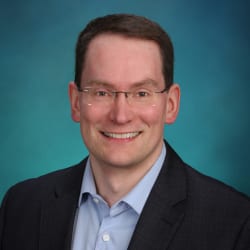 Michael Woodside is a biophysicist working at the intersection of physics, chemistry, biology, and medicine. He obtained a B.Sc. specializing in Physics and majoring in Music at the University of Toronto in 1995, before earning a Ph.D. in experimental Physics in 2001 from the University of California Berkeley, where he studied electron transport in nanostructures with Paul McEuen. From 2002–2006 he was a postdoctoral fellow in Biological Sciences at Stanford University, studying the folding of single nucleic acid molecules with Steven Block. In 2006 he returned to Canada to become a research officer at the National Institute for Nanotechnology in Edmonton, Alberta. In 2013 he became a professor in the Department of Physics at the University of Alberta, where is currently the iCORE Chair in Biophysics, leading a research group of students and postdocs from diverse backgrounds.

Professor Woodside’s work explores how complex structures self-assemble (‘fold’) in biological molecules like proteins, DNA, and RNA. His research interests include such questions as how the folding dynamics of specific molecules relates to their biological function, how diseases like ‘mad-cow’ disease can arise from incorrect folding, and what determines the outcome of folding as a physical process. He studies folding at the level of individual molecules, using laser tweezers to unravel and refold molecules mechanically while measuring structural changes in the molecule with near-atomic resolution. His work has looked at the folding of bacterial and viral RNA structures that turn genes on/off or ‘recode’ the genome to change the proteins expressed; examined the misfolding of proteins involved in neurodegenerative diseases like prion diseases, Parkinson’s, and ALS; and developed ways to measure the fundamental determinants of folding and thereby test physical theories quantitatively. The goal of his Guggenheim Fellowship is to investigate how protein folding has been shaped by evolution as a physical process.